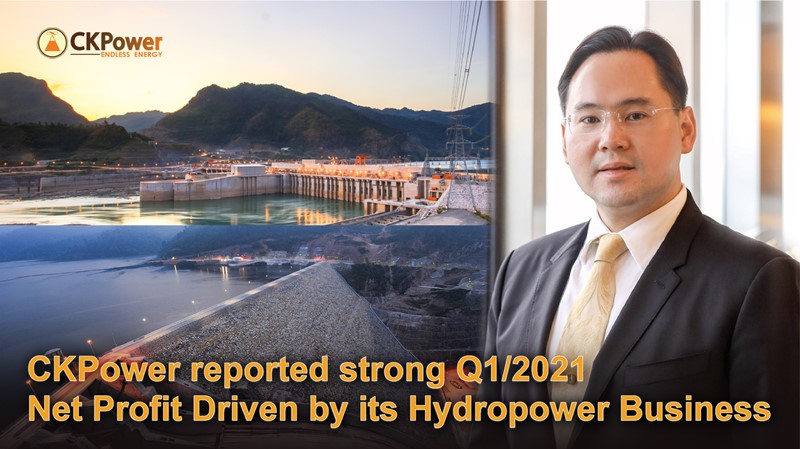 The key driver contributing to the Company's strong financial results was the improvements in operating performances of Nam Ngum 2 and Xayaburi Hydroelectric Power Plants. Nam Ngum 2 Hydroelectric Power Plant reported an increase of Baht 383.0 Million or 101.9% in revenue from sales of electricity, bolstered by higher water level in the reservoir at the beginning of 2021 and higher water inflow during Q1/2021 compared to the same period last year. Meanwhile, Xayaburi Hydroelectric Power Plant also reported strong financial results during Q1/2021, driven by the continued increase in water inflow of the Mekong River, which has resulted in an improvement in the Share of Profit/Loss from Investments in Jointly Controlled Entities and Associated Companies by Baht 297.3 million or an improvement of 90.2%.

At the same time, the cogeneration power plants and solar power plants under the management of CKPower also posted improvements in Q1/2021’s performances. The performance improvement of Bangpa-in Cogeneration Power Plants was helped by the decline in financial costs, while the performance improvement of solar power plants under Bangkhenchai Co., Ltd., was mainly driven by Bangkhenchai Solar Power Plant’s efficiency improvement following the replacement of its solar panels since Q3/2020 and the start of electricity sales to private customers of a new solar farm power plant with an installed capacity of 2.67 MW in September 2020, resulted in an increase in Q1/2021’s overall electricity sales volume.

Mr. Thanawat said that he is pleased with this year’s first-quarter performance as it meets the company’s targets. This performance exhibits the strength and stability of CKPower’s revenue stream, consistent with the rating results released on April 30th, 2021 by TRIS Rating Company Limited, which affirmed CKPower’s company rating at “A/Stable” and issue rating of the unsecured, unsubordinated debentures of the Company at “A-/Stable”, citing the proven expertise in developing two large hydroelectric power plants in the Lao PDR, the Nam Ngum 2 and Xayaburi hydroelectric power plants, both of which achieved electricity production as planned. In the second quarter, the Company expects the operating results to continue to improve strongly from the anticipated increase in normal seasonal water flows towards the end of the second quarter as the rainy season approaches, which would be beneficial to the electricity production at both hydroelectric power plants of the Company.

Mr. Thanawat also mentioned that the COVID-19 pandemic situation does not have any material impact to the operations of the Company and its subsidiaries. CKPower continues to provide support and assistance to those in the communities surrounding the power plants who are affected by the situation in both Thailand and the Lao PDR by providing support to the Bhumibol Adulyadej Hospital to construct the negative pressure rooms and providing financial relief funds to the Lao’s Ministry of Health through the Royal Thai Embassy in Vientiane as well as to the health department of Xayaburi district, Lao PDR, in April 2021 in order to be a part of actively alleviating the effects of this crisis .