Digital transformation is rapidly changing consumers’ daily life, behavior, consumption, as well as society. Innovation has, therefore, become an important factor in driving business operations and ensuring the business’s adaptability to such changes and the turning tides of the world.
Ultimately, CKPower believes that driving innovation will help us deliver high-quality products to our customers as well as reduce environmental impact throughout the supply chain. Thus, innovation management presents both a challenge and an opportunity for CKPower to improve its competitiveness in the power plant industry and meet the needs and expectations of consumers while also taking into consideration the well-being of society, environment conservation, and the sustainable development of the organization.

CKPower has established policies that focus on integrating innovation management as part of efficient resource management, such as development of engineering knowledge, personnel performance, utilization of advanced technology, and an environmentally friendly management system to mitigate the environmental and social effects of the power plant’s operations, as well as developing a cost management system that can increase the competitiveness of the organization and maximize returns for stakeholders. In addition, the Company actively and continuously promotes learning, development, and innovation through three-pronged guidelines on knowledge development for innovation as detailed below.

Guidelines for the Development of Knowledge in Innovation

Innovation and Performance in 2021

In 2021, CKPower undertook a total of 12 innovation-related projects, consisting of new initiatives as well as expansion and ongoing projects, to optimize its operational and production processes. The Company successfully reduced about THB 6 million in expenses resulting from innovations and reducing energy consumption by 3,150,419 MW cumulatively as a result of its seven energy management projects - equivalent to 1,418 tCO2e per year

Innovation and Diffusion of Innovation

With the determination to develop a model for eco-friendly hydroelectric power plants on the Mekong River, the Xayaburi Hydroelectric Power Plant features not only up-to-date technology but also innovative design and construction never before seen in the region, such as a multi-system fish passage. Furthermore, CKPower strives to support the dissemination of knowledge and experiences of success in various aspects to all sectors through activities like power plant facilities tours and seminars and lectures on the aforementioned innovations, along with consistently sharing knowledge on clean energy, renewable energy, and energy-saving innovations as well as energy efficiency guidelines. The Company is also committed to promoting and passing on knowledge of innovation among youths living in communities surrounding the plant, which in turn supports the achievement of the United Nations Sustainable Development Goal 4 (Quality Education) in a tangible way.

CKPower has undertaken a digital transformation in order to improve the readiness of its business operations by implementing “SAP S/4 HANA 1610 SP 2” to reduce the complexity of the work process for operators while increasing efficiency. Additionally, the Company has updated its internal work process to prepare for the organization’s future growth in accordance with the “Industry Framework,” an industry standard model for business processes, in order for the company to achieve its goal of implementing a digital transformation within the allotted timeframe and budget with full efficacy. 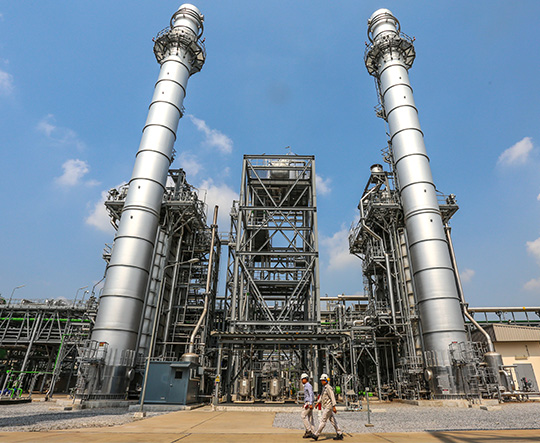 Bangpa-in Cogeneration Power Plant has enhanced the efficiency of the production system by launching a project aimed at reducing heat loss during production through the inspection, analysis, and optimization of the flow pressure at each point in the pipe system to reduce the energy consumption of the gas compressor, which pressurizes the system. This project has reduced energy consumption by as much as 466,400 kW/h, equivalent to 192 tCO2e per year and THB 963,000 saved in expenses. 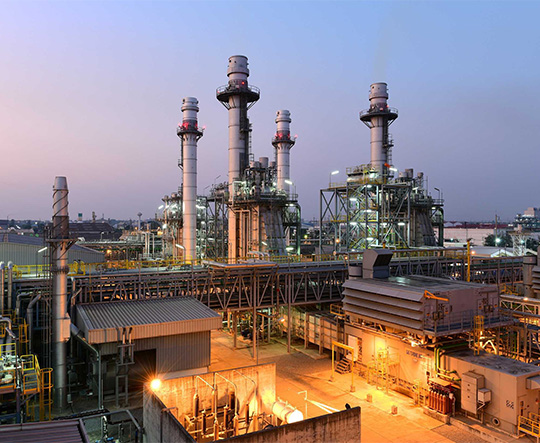 Bangpa-in Cogeneration Power Plant has instituted a policy to promote the reduction of energy use in order to help reduce the cost of electricity production, extend the life of machinery, and decrease ensuing maintenance costs. To this end, the power plant has implemented an initiative for the joint use of air dryers between BIC-1 and BIC-2 as well as reduced the number of air dryers in use at BIC-2 by one unit in order to reduce energy consumption by 1200 kWh during the production process, equivalent to 40.7 tons of carbon dioxide equivalents per year 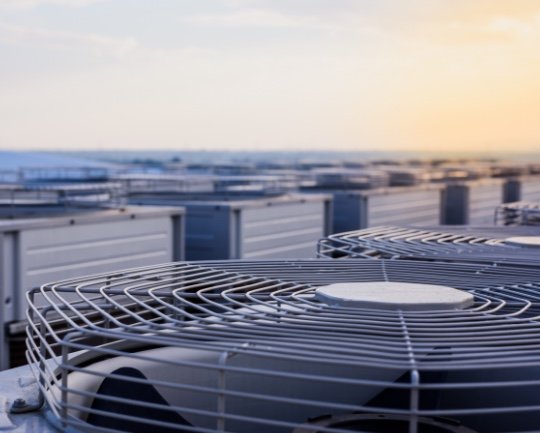 Deactivation of a Cooling Fan during Off-peak Periods

As there is less heat that needs to be dissipated during off peak periods, coupled with lower temperatures at night, there is no need for cooling towers to operate at maximum capacity. Thus, the company has begun to deactivate one cooling fan during 00.00-06:00 hrs. every day, which reduces electricity consumption by 200,000 kilowatt/hour annually or an equivalent of Baht 400,000 each year. In addition, the Company has shortened the working hours to slow wear and tear of the machine. 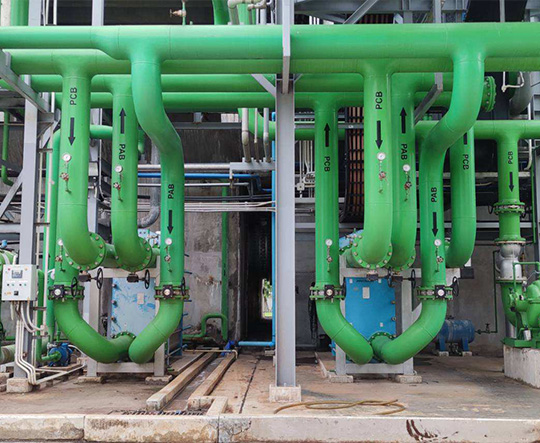 Bangpa-in Cogeneration Power Plant has managed the activation and deactivation of the cooling fan in the cooling tower to reduce power consumption and the activation of a cooling pump to better divert heat to the cooling tower so as to reduce electricity use within the plant and loss of steam due to evaporation by the cooling fan. The initiative cut down power consumption by 98,498 kWh, equivalent to 40.7 tons of carbon dioxide equivalents per year. The project won the Innovative Power Technology of the Year at the Asian Power Awards 2021, hosted by Asia’s leading magazine in the electric power industry. 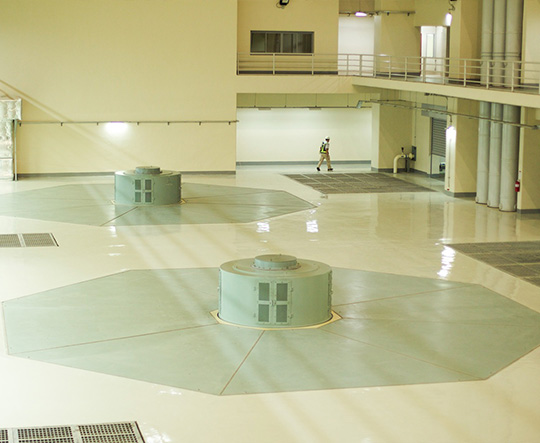 Nam Ngum 2 Hydroelectric Power Plant conducted a study on the relatively rapid decrease in the insulation resistance of power generators, as the equipment can be damaged when such resistance drops too low and investigated the issue of dust collecting in the carbon brush during production. After data collection and the installation of a slip ring dust collector, it was found that the device helped in the following ways:

1. Slow down the decrease of insulation resistance.
2. Preventing the operational temperature of the slip ring from getting too high and reducing the temperature by 40-47 degrees Celsius.
3. Reduce PM 2.5 from the carbon brush in the area of operation.
4. Extend the lifespan of the carbon brush to an extent and reduce erosion by a maximum of 19% 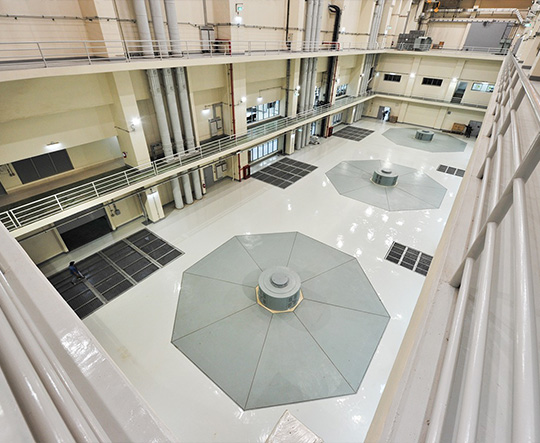 Nam Ngum 2 Hydroelectric Power Plant carried studies on maintenance to reduce the import of spart parts and energy loss resulting from the erosion of the rubber seal used in the main inlet valve at the power plant. Once the seal optimal for the equipment was chosen, a chemical property test and a risk assessment were conducted before it was adopted. The seal successfully reduced erosion and saved THB 80 million in expenses throughout the duration of the project. 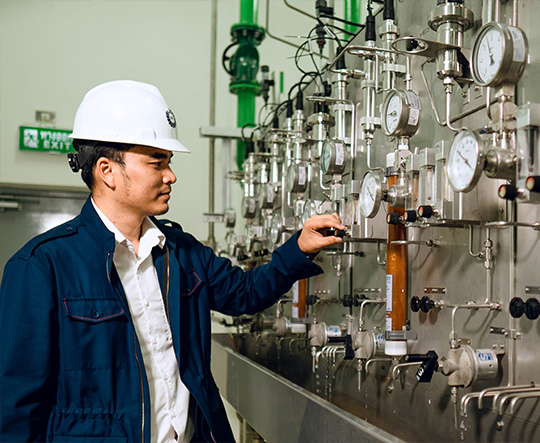 Bangpa-in Cogeneration Power Plant 1 (BIC-1) has implemented the Adjustment and Control of the Chloride Range in the Cooling Water of BIC1 program to increase chloride concentration, as the amount of effluent released from the cooling tower depends on the coolant cycle of concentration, which is correlated with chloride concentration. Given this, the Company has undertaken to increase chloride concentration in order to reduce the amount of effluent produced by the cooling tower at Bangpa-in Cogeneration Power Plant 1. In 2021, BIC-1 was able to reduce its effluent by 58,500 cubic meters as well as save over Baht 3 million in operation costs, achieving its 2021 goal of reducing effluent by 30,000 cubic meters as well as setting a new target for 2022. This program safely reduces the use of water under the supervision of specialized personnel, thus demonstrating CKPower’s commitment to enhancing the efficiency of energy production alongside environmental conservation. 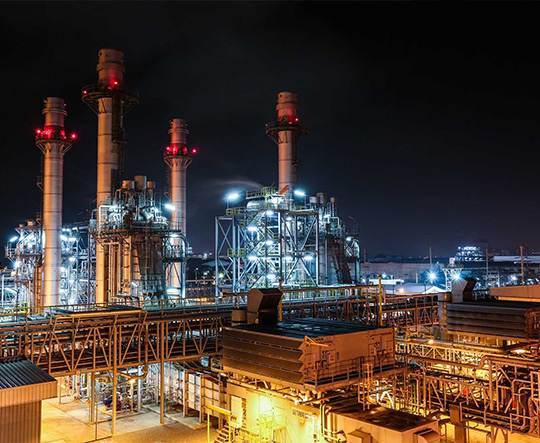 Bangpa-in Cogeneration Power Plant 1 (BIC-1) currently has three gas compressors, two in use and one as backup, which serve to pressurize fuel gas, increasing pressure from 26 to 51 bars during peak periods and from 26 to 38 bars during off-peak periods, before being fed into the gas turbine. Inspection of gas compressor efficiency during off-peak periods revealed the occurrence of low fuel gas flow in the gas turbine, causing an amount of residual fuel gas to flow back through the recirculation control valve into the gas compressor for repressurization and resulting in energy loss. The result of this research, development, and experimentation project on the deactivation of gas compressor use during off-peak periods has thus enabled the Company to reduce its energy consumption in 2020 by about 396,253 units and the ensuing costs by as much as Baht 1 million. This innovation received recognition by Asian Power, a leading magazine in the Asian power industry, earning a silver medal in the Asian Power Awards 2020 in the category of gas-fired power plants and the top spot for the power plant with the most notable environmental upgrades of the year in Thailand. 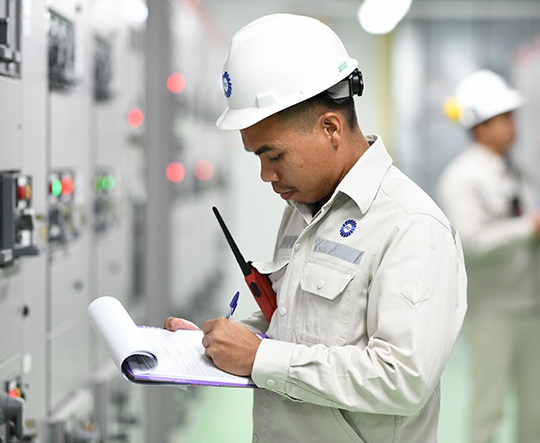 Due to reduced consumer demands for steam energy at Bangpa-in Power Plant 1, resulting in residual steam which is then discarded into the compressor and thus a large amount of energy wasted during the production process, the Company recognized the opportunity to channel this excess steam into the electricity production process and, consequently, initiated an engineering research project to reduce wastage by diverting excess steam into electricity production during periods of low steam energy usage. To this end, the Company has undertaken a project to increase the energy production capacity of the steam turbine to achieve a higher 25.3 MW as well as the efficiency of the production process by enabling the steam turbine control system to utilize residual steam to successfully generate 1.3 MW of electricity. 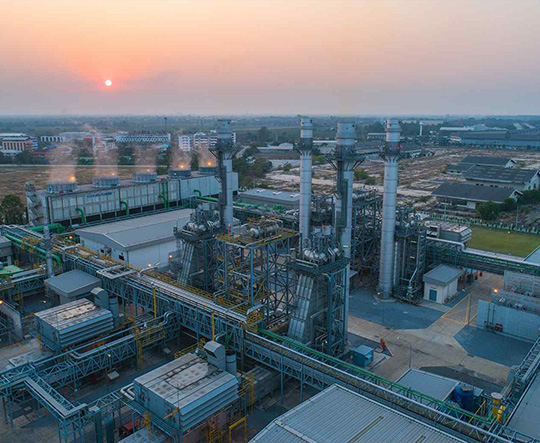 REDUCTION OF GAS COMPRESSOR LUBRICANT USE

Food security and biodiversity are vital to the way of life in communities along the Mekong River. As such, the Xayaburi Hydroelectric Power Plant has been conducting several studies to better understand the life cycles, migration pattern, and physiological features of the various fish species in the river. The Project has successfully implemented a PIT-tag system to trace tagged fish in the fish passage facilities. 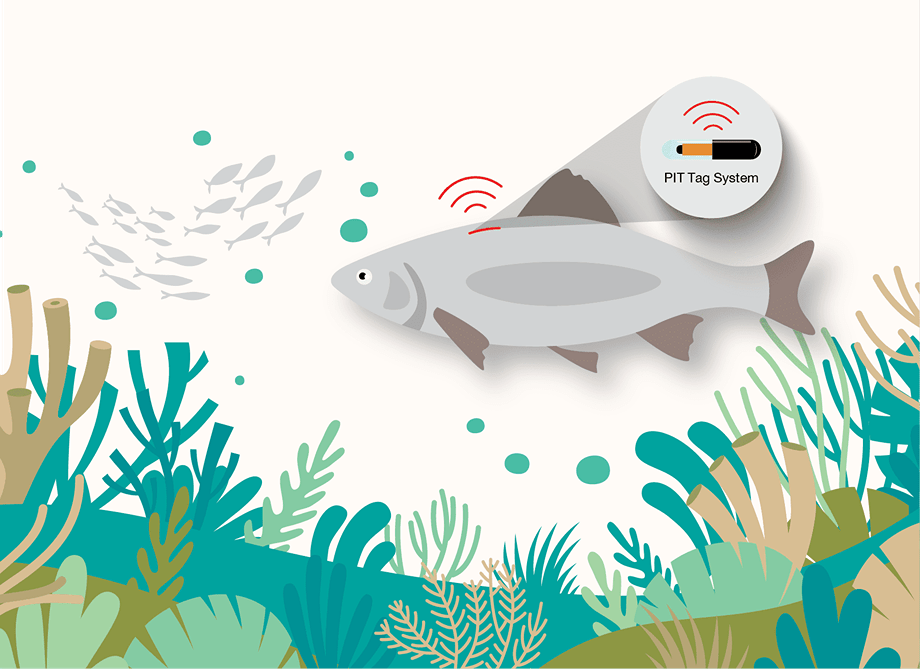 From a very early phase, even before project construction began, the Xayaburi Hydroelectric Power Plant studied and tracked the migration patterns of fish in the river. To enhance the fish monitoring system and to gain a better understanding of the behavior of various species, XPCL entered into a collaboration with Charles Sturt University in New South Wales, Australia, Karltek Pty Ltd, Australia, as well as the National University of Laos (NUOL) and the Living Aquatic Resources Research Center (LARREC) of Lao PDR to research, design, and develop the PIT-tag system. 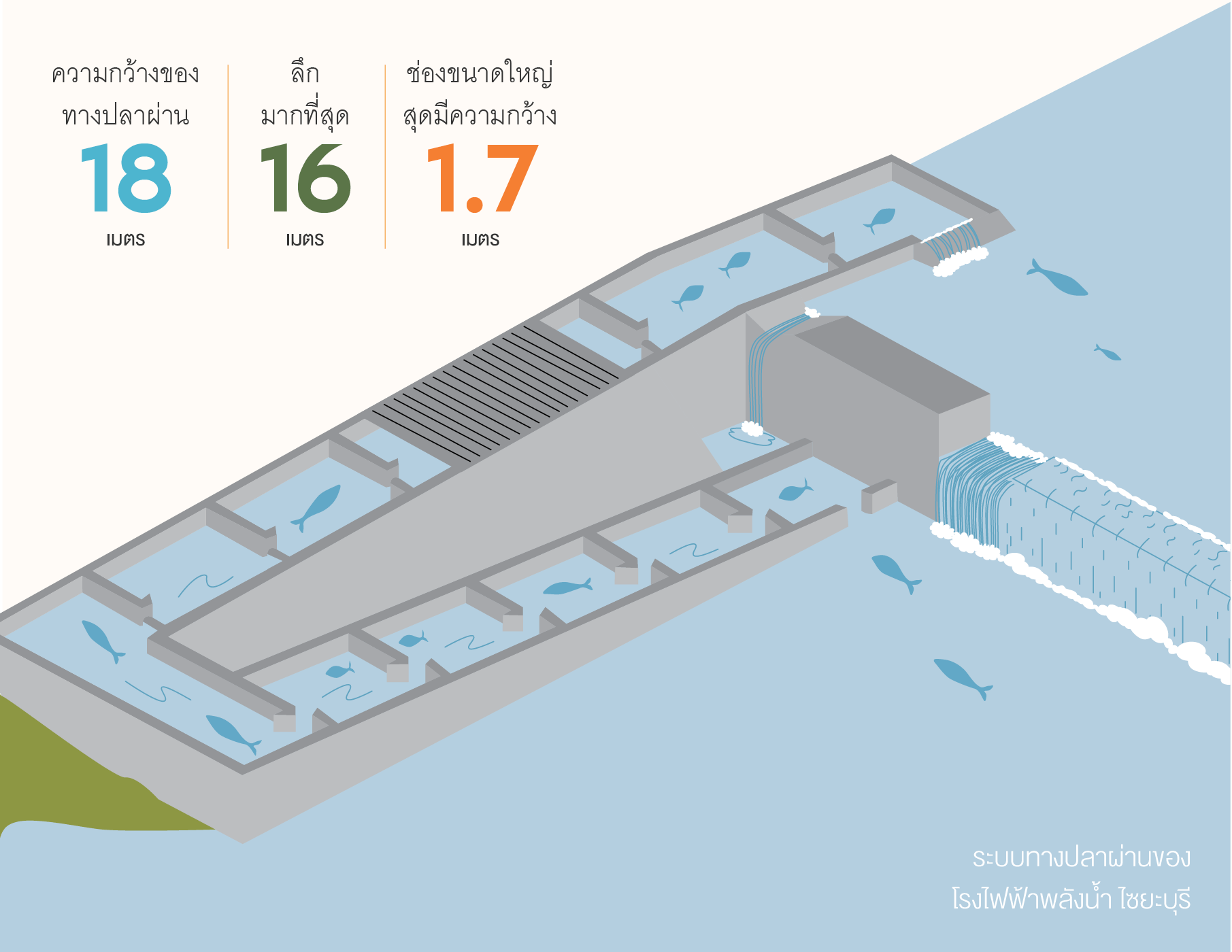 The complex multi-system fish passage facilities at the Xayaburi Hydroelectric Power Plant, which combine a vertical-slot fishway and two fish locks, are considered one of the largest systems worldwide.

These large sizes had never before been covered by PIT-tag antenna, so one of the first questions which needed an answer was to check if existing antenna would function under these conditions. To design an effective PIT-tag system, the working group created a prototype to study its efficiency to detect PIT-tags. Once this was done, the system was installed at the Xayaburi Hydroelectric Power Plant. The major components of the system are the antenna which detect the tagged fish when passing through the slots. The largest antenna put in place is 8x1.5 meters and is able to detect tagged fish with very high accuracy. There are relatively few studies on fish migration in the Mekong compared to research in other regions, such as in America or Europe. In addition, physiological features and fish species vary greatly in different parts of the Mekong. Therefore, the fish migration monitoring system designed for the Xayaburi Hydroelectric Power Plant is considered an innovation and is the first deployed in the Mekong Mainstream. Built upon existing technology, this system provides valuable data regarding fish behaviour and migration. The results from the PIT-tag monitoring allow the operation crew to adjust and optimise the conditions within the fish passing facilities to even further increase their efficiency and reduce the environmental impact of the Project.